Liv died when she was just six years old. At least, that’s what the authorities think.

Her father knew he was the only one who could keep her safe in this world. So one evening he left the isolated house his little family called home, he pushed their boat out to sea and watched it ruin on the rocks. Then he walked the long way into town to report his only child missing.

Suspenseful and heart-breaking, Resin is the story of what can happen when you love someone too much – when your desire to keep them safe becomes the thing that could irrevocably harm them.

First published in Great Britain in 2018 by Doubleday (imprint of Tranworld Publishers / Penguin). Published in Denmark in 2015 by Tiderne Skifter (and in 2019 by Lindhardt and Ringhof). 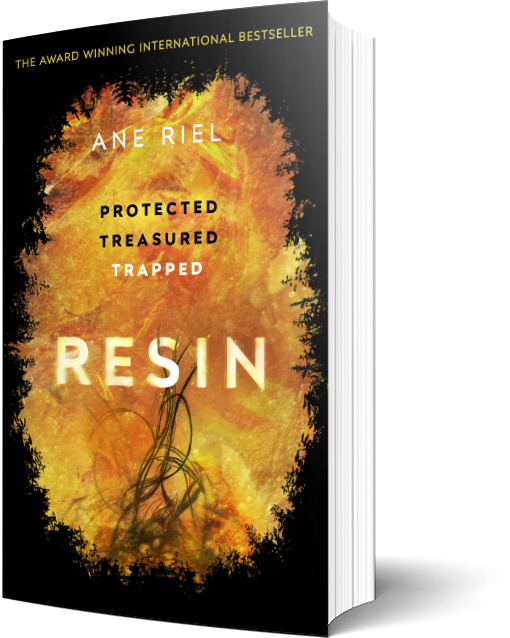 First published in Great Britain in 2018 by Doubleday (imprint of Tranworld Publishers / Penguin). Originally published in Denmark in 2015 by Tiderne Skifter (and in 2019 by Lindhardt and Ringhof).

“It reminded me of Stephen King at his best: creepy as hell, but with compassion for every character, however misguided.”

“One of the most pleasurable reads I have found among Danish novels for a long time.”

“RESIN is a tremendous little novel”

“Ane Riel gives the reader goosebumps in a grotesque novel that is as beautiful as it is dark.”

The success of the second novel

Resin was greeted with an exceptionally warm welcome by critics and readers alike, when it was first published in Denmark in 2015. Since then Ane Riel has received several awards for Resin including the prestigious Glass Key, a literary award presented to the author of the best Nordic thriller or crime novel. The fact that Resin has scooped up the four most important crime awards in Scandinavia is unusual as the book never was conceived of, written or presented as a crime novel or thriller, but purely as a work of literary fiction – albeit quite suspenseful!

Awards and nominations for RESIN

Resin has been sold to 31 countries, so far, including the UK, Germany, Italy, France, Spain, Japan and China. It has also received very positive attention abroad, not least in Britain and The Netherlands, where it has received exceptional reviews in the national papers.

Resin was picked as one of the Best Books of 2018 by The Guardian, The Telegraph and The Daily Express. In 2019 it was in the top five of best translated fiction novels in the Netherlands.
Scroll down  for a selection of reviews in English.

Also, the film production company Zentropa acquired the rights to Resin. The film – directed by Daniel Borgmann and starring renowned Danish actors including Sofie Gråbøl (The Killing) in one of the leading roles – world-premiered at the Toronto International Film Festival in September 2019.

Please go to the PRESS SECTION for press photos and biography.

“It reminded me of Stephen King at his best: creepy as hell, but with compassion for every character, however misguided.”

Review by Jake Kerridge / The Telegraph

“One of the most remarkable books I’ve read for a very long time … This book of the year contender.”

“Resin has the gruesomely compelling quality of a Brothers Grimm fairytale … It’s an extraordinarily atmospheric and often harrowing study of obsession and possessive love.”

Review by Laura Wilson / The Guardian

“Deliciously macabre … It vies with the darkest imaginings of the Brothers Grimm.”

Review by Alison Flood  / The Observer

”Resin expertly navigates a wealth of themes – obsession, grief, love, innocence and childhood – and binds them together in a cleverly crafted, gripping tale. Addictive, brutal and honest, Resin is an emotional rollercoaster.”

Review by Mika Cook / The Skinny

Shipwrecked dreams and the pain of loss are central themes in Ane Riel’s second novel, RESIN. Although it may sound bleak, which it certainly is, the story is interspersed with so much humor and vitality, that it is truly a little mixed bag of cross-genre gems. At the end of the book, one is both enriched, moved and amused, having been led through a whole gamut of emotions, and if one had known beforehand, just how increasingly unnerving it would become, one wouldn’t pick it up in the late hours of the night. Ane Riel manages, in other words, to strike a chord with her readers. Her language is pure and sharp in a crooked sort of way, her characters ambiguous and colorful, while the story is captivating, the tone melancholic, melodious and masterfully strange, and in the end she bundles everything into a little universe of its own, where there are no definitive answers or conclusions, but where interpretations and the very backbone of one’s point of view is challenged. […] RESIN is about how a sensitive individual like Jens is overcome by the grief of losing someone, and how he takes it out on his own family and his own life, to avoid further pain. But it is also about how love can allow and tolerate too much, and how the outside world cares little more for those who stand out – other than using them as fuel for a little cheap gossip. However, at the same time, there is no finger wagging or moralising reprimands in Ane Riel’s novel. Her text is open to interpretation, both because those who live lives stuck within their own heads, aren’t always the strangest among us, but also because Liv’s naive and logical approach to the world puts both big and small issues on the table and challenges the reader, so that he or she reconsiders normality as they know it. RESIN is a tremendous little novel.

It is both a thriller and a family saga of the odd sort, narrated with a fantastic feel for the child’s mind and inner world. […] Riel manages to paint her strange stories with love and terror, poetry and paranoia, imagination and death without ever loosing track of the human aspect. One of the things that makes “Resin” luminous and light, in spite of the fact that it weights on the heart and rattles your nerves, is the author’s ability to maintain a certain tongue-in-cheekness in the midst of the tragedy as well as a wonderful eye for the quirky in both language and characters. It is one of the best books to emanate from the body of Danish crime in a long time.

Holy smokes, Ane Riel has written one wholly captivating and remarkable novel. […] Gloomy Nordic and at the same time, and magically realistic, a spell conjured up by a sensitive child’s fantastic descriptions of life on the island and an ending that is almost apocalyptic and – fortunately – leaving a chink of light and hope for the child’s future. […] RESIN has been one of the most pleasurable reads I have found among Danish novels for a long time.

Other authors about RESIN

“Astonishingly good – a glittering dark fairy-tale that will grip you from start to finish. The final few pages had my pulse racing.”

“A chilling story about the lengths a man will go to protect his family and way of life. Liv and the terrifying place she manages to survive in will stay with me for a long time.”

“Darkly brilliant. As beautifully written as it is page turning – an original and compelling voice.”

“A vivid, fable-esque exploration of love when it is too much.”

“Absolutely brilliant – such detailed layering of character, moving and creepy as hell. So original and beautifully written and I couldn’t wait every night to read it – the mark of a truly compelling book.”